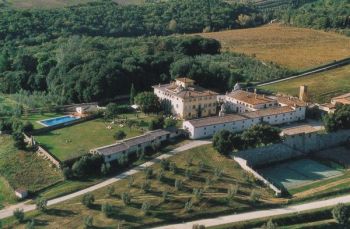 Villa Arceno near Castelnuovo Berardenga and Sienna
Villa Arceno as it is now was built at the end of the 17 C by Flaminio Del Taia. In the early 19 C, the property passed into the hands of the Piccolomini Clementini, who renovated the villa and built the huge park that surrounds it. The rectangular building is on three floors, as the string-course on the exterior makes clear and ends with a pavilion roof at the centre of which there is a dovecote. At the piano nobile level on the main façade of the building there are three arches with pilasters running the full height.

Next to the villa stands the Chapel of San Giovanni, built around 1730, and near it another lower building whose interior spaces are used for farming activities. At the end of this structure begin the stables, the rear part of which acts as the boundary wall and is visible from the garden. 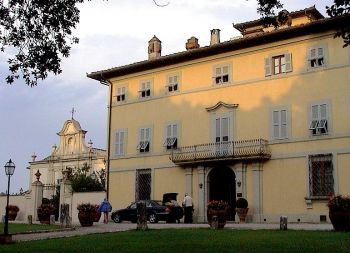 Villa Arceno and the Chapel of San Giovanni
The immense park that spreads out in front of the villa was designed by Agostino Fantastici in around 1833. It extends for several km and ends in an artificial lake that is completely surrounded by woodland. The woods themselves are thick with trees, including some quite rare species such as sequoias, camphor trees, Lebanon cedars, dwarf palms, mimosa and jasmine. The main types of tree, however, are oaks, pines and hornbeams. Access to the park is through either of two gates, a main entrance and a side entrance. The latter opens onto paths leading in three directions, one straight to the lake, the others running round the outside of the wood, through which various other winding paths run. Two buildings near the artificial lake, which is fed by the Ombrone river, were built as resting-places and for purposes of shelter, and are known as the ninfeo (nymphaeum) and the casa delle barche (boathouse). The nymphaeum, a Renaissance-style building made of brick and travertine, stands on a paved lakeside shore that leads down in broad steps to the water, and acts as a dock, with small mooring posts for the boats that are used to cross to the islands which lie at the centre of the lake and are also connected to the lakeside by wooden bridges. The boathouse, which is joined to the lake by a canal, is a rectangular building with pavilion roof, with a pointed arch opening on both sides. Inside the park are other buildings that were added for purely decorative purposes: the calcinaia (limehouse), reached from the villa by an avenue of cypress trees decorated in the centre with a terracotta statue of Marsia; a circular Doric temple (with a statue of Pandora in it), built in a commanding position; an obelisk at the centre of a clearing; and a lily pool whose fountain has a central water jet and a grotto behind in spongestone, on the main path leading to the lake. In 1848, Emilio Piccolomini Clementini had a tunnel built connecting to the road to Arceno, which facilitated access to the estate and created charming views over the park.

Over the years the property has changed hands many times and in recent years has been renovated and developed into a large agricultural concern. 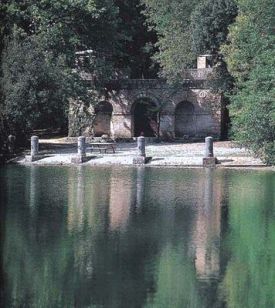